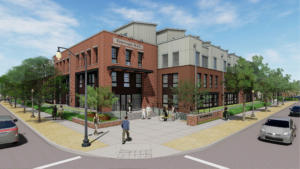 R.D. Olson Construction Inc. has made recent inroads in multiunit contract building and said it will maintain or slightly expand its work in that market as it continues a diversification drive of the past five years in a slowing hotel construction market.

The Business Journal OC 500’s Bob Olson owns both, and the former builds for the latter. R.D. Olson Construction built the Marriott Irvine Spectrum, which opened in March, and the boutique Lido House in Newport Beach, which opens in May.

Last year it was No. 13 on the Business Journal’s list of commercial construction companies, down two notches, with $218 million in revenue, down 6%.

Partner and President Bill Wilhelm, who also owns a stake in the company, said it’s now at about $225 million in annual revenue – two-thirds from hotels.

About 30% is from multiunit projects, up from 20% in recent years; 97% of multiunit work is affordable housing, student housing and timeshares. and there’s a sliver of market-rate, or standard-priced work. Wilhelm wants more mixed-use apartment projects-rental living that includes retail-and to get back to assisted living.

About 5% is from construction of educational campus buildings, which Wilhelm began to increase his focus on about three years ago.

He aims for 35% of revenue from multiunit construction and 8% from the education work.

If the remix plays out, R.D. Olson Construction’s reliance on hotel construction will drop from 75% of business a few years ago to 57% a few years from now.

All of Olson’s multiunit work is for-rent product, which bears a striking resemblance to hotels when considered as ultra-short-term rentals-as short as one night.

The hotel business, including construction-Olson’s bread and butter-had a five year boom that began a few years after the 2008 recession.

Olson benefitted building, for instance, the Pasea Hotel & Spa in Huntington Beach, an R.D. Olson Development project that opened in 2016. Olson Construction’s 2017 revenue of $218 million was twice its annual take as of June 2012, when it was No. 16 on our construction list as $98 million-up 51% year-over-year.

Hotel construction is said to be cooling.

People attending the Americas Lodging Investment Summit, produced each January in downtown Los Angeles by Costa Mesa-based Burba Hotel Network LLC, over the past two years have discussed a market peak over all, a subsequent shaking out in some markets, and which “secondary markets” should now get attention.

Orange County still looks strong for hotel construction, according to recent data of consultant and broker Atlas Hospitality Group in Irvine. Market research by L.A.-based CBRE Hotels shows annual boosts of 5.8% in average daily rate, 8.6% in revenue per available room, and 2.6% in occupancy, as of February.

But Olson also builds outside of OC. Wilhelm said its history runs as far east as Atlanta and his vision extends beyond the county’s environs with that continued focus on for-rent product.

He means that in a good way.

“With the cost of housing, people are leaving single-family homes and going multifamily,” he said.

Empty-nesters cashing out and downsizing or millennial who can’t afford to buy-both still want stylish stuff.

Affordable housing in OC is going to be nicer than your average bear cave, and other pieces of the multiunit puzzle also skew higher-end.

Students typically pay above-market rates for rooms, for instance, and healthcare facility owners, such as assisted-living projects, have pushed into properties where residents pay out-of-pocket instead of through Medicare.

Local healthcare facility REITS are to one degree or another looking to private-pay tenants at properties they own.

Olson Construction is consequently looking to fill its dance card in workers, colleagues and clients.

It hired Cynthia Cook as business development director six months ago to make it rain on both multiunit deals and education construction.

It strutted its stuff a bit with the renovation of space in old-town Orange across from the train station for the home of the Hilbert Museum, a Chapman University art gallery.

Olson hasn’t gotten a lot of revenue from the education pivot yet, but “we’re enhancing relationships, and prospects are improving,” Wilhelm said.

Cook’s hire highlights an intriguing element of the multiunit effort-the need to attract and keep staff.

Our 2017 construction company list showed a 13% jump in Olson’s employee count to 123. Wilhelm has to hold those workers in a tight labor market and fill gaps as others retire.

“You need a pipeline to grow and retain talent,” he said.

In colleagues and clients, it looks in part to hospitality “project partners” as “excellent referral sources” for new work.

The developer on the latter is Related California in Irvine, led by the OC 500’s William Witte; the designer is IDS Group Inc. in Irvine.