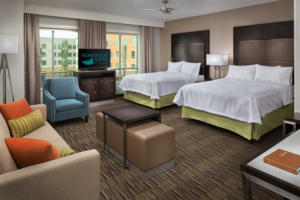 The number of new hotels that opened in California increased 53 percent in the first half of 2017 and there were 15 percent more hotels in development and 6 percent more under construction vs. the same period in 2016, according to an Atlas Hospitality Group study.

“This is a record number of hotel rooms that have opened in the first six months of the year,” said Alan Reay, president of Irvine-based Atlas.

Reay said many hotels are being built now because the price of buying and renovating older hotels is high, that it is more attractive to build a new hotel, construction financing and loans are readily available and there have been six years of revenue increases.
In Orange County three hotels with 461 rooms opened during the first half of the year.

Homewood Suites by Hilton Irvine John Wayne Airport: The 161-room hotel opened this winter. It offers studio, one- and two- bedroom suites. Each has a fully equipped kitchen. The hotel has a fitness room, pool, business center and meeting rooms.