The Most Anticipated Hotel Openings of 2018 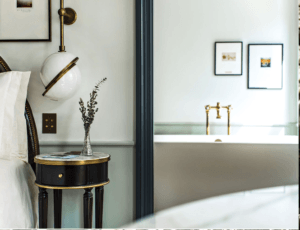 As 2017 comes to a close and we look forward to the year ahead, jet-setters have plenty to be excited about when it comes to new hotels. There will be a lodge in a Rwandan national park perfectly situated for observing primates in their natural habitat; a luxurious retreat with direct access to a highly Instagrammable geothermal spa; and even a historic village that has been relocated and reassembled brick by brick in the hopes of conservation. Many of these properties are destinations in themselves, some might introduce you to a new neighborhood in one of your favorite cities, while others will bring you to far-flung locales waiting to be explored. As you plan your travels for 2018, here are 14 of the most anticipated openings we’re keeping an eye on next year.

2. NoMad Los AngelesDowntown Los Angeles is going through a resurgence and the arrival of the new NoMad is only further proof of its comeback. The flagship property, along with its stellar restaurant, has long been favored by New Yorkers (it was even chosen by Beyoncé for her Soul Train–theme birthday party last year), which will make this second outpost particularly special for bicoastal travelers. Arriving late January, NoMad Los Angeles is taking over Giannini Place, a building originally built in the 1920s that served as the Bank of Italy’s headquarters. Aspects of its Neoclassical construction have been preserved and the hotel’s 241 rooms will pull inspiration from the carefully restored gold and blue Italianate lobby ceiling while still maintaining the Parisian flare we’ve come to know and love. The food and beverage program will be overseen by chef Daniel Humm (of acclaimed Eleven Madison Park) and restaurateur Will Guidara and will include an Italy-inspired café, but the rooftop, with its alfresco dining space, cocktail bar, and pool, will surely be an instant hit.