The industry fears staffing shortages, but unions think it’s all about pay cuts. 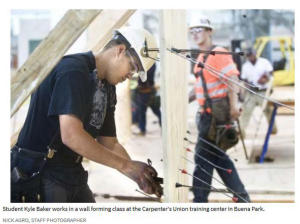 What exactly is a “shortage” of construction workers?

Is it as developers and contractors see it: the lack of qualified managers and craftsman to handle increasing demand for construction work?

Or is it how labor envisions it: shrinking numbers of workers willing to work for low wages with limited benefits?

Whether you’re deft with the economics or paperwork of the building business or skilled with its craftsmen’s tools, a healthy rebound in creating new real estate means you are in demand. And that shift has supposedly become a production headache for construction bosses.

Ponder the employment trends, as counted by the Bureau of Labor Statistics:
• Nationwide, construction bosses employed 6.08 million in September, up 3.9 percent in a year and the highest total since May 2009.
• In California, construction employment is back at 697,100, up 164,400, or 31 percent, from post-recession lows. Roughly 1 in every 10 California jobs created in the recovery is in construction.
• And in Orange County, construction payrolls ballooned by 21,000, to a six-year high of 86,700, thanks to a hiring pace that’s triple the growth rate for all local employers.

The hiring spree may have tapped out the supply of available construction talent, whether it be for front-office work or positions in the field, according to a new study from the Associated General Contractors of America trade group. This analysis says construction bosses are scrambling to keep operations fully staffed – here and nationwide.

“The shortage of qualified construction workers is a real problem for the industry, which has shown impressive signs of positive growth,” says Bill Wilhelm, president of Orange County-based R.D. Olson Construction, a builder with 12 Southern California hotel projects either finishing or starting in 2014.

“Due to the slowdown of the past, numerous workers either left the industry or left the state of California and have not returned,” Wilhelm said. “Add on top of this, the next generation of construction workers is not sufficient to take the handoff from those craftsmen who have entered or are entering retirement.”

Union leaders say tactics that construction bosses use to cut labor expenses make the industry a less desirable career choice and limit skilled-worker availability. Construction is a tough career, as the opportunity to work is volatile, with industrywide unemployment averaging 20 percent during the past four decades.

A study of California’s construction labor market by the Economic Roundtable, funded by the United Brotherhood of Carpenters, details a continuing move away from what they dubbed “formal” building work to what they consider traditional employer-employee relationships.

A growing number of California builders – notably homebuilders – use independent companies to staff job sites. Those subcontractors employ – properly and not – growing ranks of “independent contractors.” Those independent workers typically don’t get many of the benefits and legal protections associated with regular jobs, with employer compensation savings running as high as 30 percent.

The union study claims there’s an even larger workplace – not so secret but often off the books – where salaries can be as little as half of the norm. The average California veteran construction worker had a $32,800 salary in 2012, the study said.

Roughly 140,000 California construction workers are in these so-called informal positions –roughly 1 in 6 of all construction staff members, according to the union study. These workers are either improperly categorized as independent contractors or in under-the-table payment situations.

By the union’s math, “informal” workers earned $1.2 billion less in compensation in 2011 vs. what they would have gotten in “formal” workplace arrangements. And it’s not simply salary. Missing dollars also would have helped fund several state worker-protection programs.

Where are the new construction workers coming from?

Consider Danny Dean. Two years ago, he was new to California, fresh out of the military and looking for work. Construction was in his blood; his dad was in the electrical trades back in New Jersey.

Dean started doing carpentry for a homebuilders’ subcontractor. After a year, he switched to the union side of the equation, as an apprentice carpenter working commercial construction. One of his first unionized jobs was helping build an office tower at Fashion Island in Newport Beach.

Dean, 24, who lives in Lake Forest, has enthusiastically embraced a noteworthy job-enhancement program by his union: skills training done though local community colleges at union-funded sites. Dean last week was training at a new, 107,000-square-foot facility off the I-5 in Buena Park.

“It’s crazy what I learn here,” says Dean, taking his fourth weeklong training session in a year. “I can actually take this stuff and put (it) in place back at work.”

This training is part of a union program, largely funded by a slice of the compensation paid by contractors, that brings novices up to journeyman status, and keeps veteran workers up-to-date with the latest skills, tools, materials, safety practices and regulations required for today’s construction projects.

The schooling facility, one of nine in Southern California for the United Brotherhood of Carpenters, offers both classrooms and an indoor construction site for realistic hands-on lessons in outdoor structures, highways and office-space work.

“We want them to see there’s a career here,” says Thomas Rooney, coordinator for the union’s Southwest Carpenters Training Fund.

Union officials know that in today’s cost-conscious and extra-competitive world, their worker members have to justify the higher salaries – and benefits – they get. The contractors who hire union workers often battle for big-dollar contracts for major real estate or municipal projects. Profiting from that huge-scale work can hinge on worker skills.

A typical apprentice in the program takes a week off from work roughly once a quarter for four years to reach the coveted journeyman’s status. The syllabus exposes workers to a wide range of skills and construction techniques within their own slice of the trade, loosely delineated by indoor or outdoor work.

Despite the overall construction rebound, enrollments in the carpenter training program across six Western states is about 6,000 versus up to 14,000 during the real estate boom.
“That it hasn’t increased more surprises me,” says the carpenters union’s Rooney.

Project manager positions were the toughest construction office jobs to fill in California – 61 percent of bosses surveyed put it atop the list, the contractor survey shows. Next were engineers and estimating professionals, both problematic, at 41 percent of the shops polled.

Out in the field, iron workers and plumbers were California’s hardest to fill – cited by two-thirds of employers. Carpenters were next toughest, with 59 percent of state employers saying they have trouble finding adequate labor.

Construction bosses say they using extra subcontractors and staffing companies to fill worker gaps. And 27 percent of California bosses said they were turning to unions for help in finding workers versus 9 percent nationally.

Other labor-boosting strategies include moving work away from the job site, the contractor survey shows. Thirty-five percent of California bosses choose prefabricated parts to help with the labor shortage (versus just 13 percent nationwide.)

This imbalance should add up to a seller’s, i.e. worker’s, market, with “prices” (wages) rising accordingly. Curiously, the survey showed compensation seems to be on the rise more away from California –as well as noticeably more for front-office staffs.

No executives surveyed by the contractors in the state saw the situation getting better any time soon. Thirty-three percent of bosses think it’ll become harder to get skilled craftsmen; 45 percent think challenging hiring conditions will continue.

It could be worse, I guess. Think of the trucking trade, facing its own staffing shortages – as much as 40,000 drivers short today.

That gap has the potential to grow fivefold by the next decade.

Seems some truckers are being drawn to the reviving construction industry. For many, swinging a hammer close to home beats hours alone on the road.