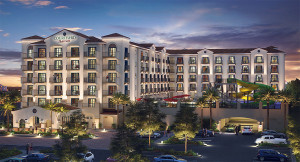 Dirt’s turning at a rapid clip for Orange County’s hotel landscape, and there may be no other local company that reflects that activity more than R.D. Olson Construction.

The Irvine-based construction company founded and headed by Bob Olson—also chief executive of R.D. Olson Development— is nearing completion on a 210-room Courtyard by Marriott at the Irvine Spectrum.  The company is also working on another Courtyard by Marriott, this one with 221 rooms, in Anaheim. And it’s scheduled to break ground in June on a 250-room hotel at the Pacific City mixed-use project in Huntington Beach.

But it’s not just R.D. Olson that’s building in the hospitality segment.

The project “is a huge testament to the strength of the OC market,” said Alan Reay, president of Irvine-based Atlas Hospitality Group, a real estate broker and consultant.  And earlier this month, DKN Hotels of Irvine announced the opening of a 120-room SpringHill Suites in Anaheim.

The 485-room Irvine Marriott announced the completion of its $5 million lobby and lounge area makeover in February. The hotel, under Bethesda, Md.-based parent Marriott International Inc., wanted to make the brand relevant to a new generation of travelers looking for more contemporary settings and options in how they use the hotel to dine, relax or hold business meetings.

The project is also at the heart of a push to create a more downtown feel for the hotel to act as a community gathering place for not just travelers but also residents and workers
in the surrounding area, General Manager Scott McCoy told the Business Journal earlier this year.

Irvine Marriott is expected to begin renovation work on guest rooms next year—the final phase of a three-year improvement project expected to cost $12 million to $13 million.

Reay said activity for the hospitality sector is picking up when compared to the recession period.

“The market is back, and it’s back very, very strong. Revenue per available room is approaching an all-time high in Orange County, and we’ve had very, very little new supply; so I think that we’re going to see more hotel rooms being constructed just because values are reaching such a point that it makes sense for people to begin building again.”

Few of the county’s construction and renovation projects are reflected on this week’s Business Journal list of the largest hotels in Orange County, which cuts off with No. 50,
the 250-room Crowne Plaza Fullerton-Anaheim.

The largest hotels here combined for a workforce of 13,654 local employees.  That’s roughly flat compared to the year-ago period.

Changes in worker counts were slight, with the largest worker decline at No. 6, Hotel Irvine Jamboree Center, formerly the Hyatt Regency Irvine, which shed 55 people over the 12-month period. However, the shift resulted from the hotel’s  transition from a major brand to a boutique property late last year.

Most of the former Hyatt Regency employees stayed on with Hotel Irvine, but some chose to stay with the Hyatt company, an Irvine Company spokesperson said.