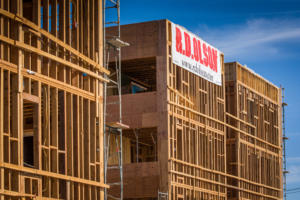 By focusing on forming strong relationships with clients, developers and the communities in which it works, R.D. Olson Construction has achieved success in more ways than one.

With a range of new efforts in the affordable housing space, the firm seeks to make an impact for limited-income residents while cultivating a close-knit company culture.

According to President Bill Wilhelm, the success of R.D. Olson is due largely to its commitment to these relationships.

“We are after growth, but we’re after growth in relationships and partnerships with our existing company base and our new future customer base,” Wilhelm says. “We are not out chasing a number. We know that our financial growth will [increase] with our success with partners and customers.”

Wilhelm has been part of the R.D. Olson team since 1994. Over the years, he has witnessed the company move from a somewhat small general contractor to one of the industry leaders in ground-up and renovation construction.

R.D. Olson focuses on serving the needs of its existing customer base above all else. Returning business makes up about two-thirds of its current portfolio, and Wilhelm hopes that this figure will continue to grow in the coming years.

“Part of our short- and long-term goal is to increase the repeat business,” Wilhelm says. “About 70 percent of our volume is repeat business, and that tells you what kind of company we have. It’s one that truly is focused on quality over quantity. When you have that kind of approach, success is always right in front of you.”

R.D. Olson has participated in the development of projects ranging from restaurants to hotels. More recently, it has branched out into affordable housing. One of its recent efforts, the Village at Calabasas, added 180 units of housing to a community in southern California. The property was completed in 2016.

Fullerton Family Housing in Orange County is now under construction and, upon its completion in spring of 2018, will offer 55 units of affordable housing. The site itself is compact, requiring some creativity to make the most of the development.

“It’s almost like putting a property on a postage stamp,” Wilhelm says. “We are maxing out this site with open space, including decks, walkways and things of that nature.”

Despite the limited space for construction, development at Fullerton Family Housing is taking place with careful attention to architecture and aesthetics.

“The rooms are very spacious,” Wilhelm says. “Sometimes, you get the wrong impression when you hear the words ‘affordable housing.’ These are nice units. They’re spacious, and the finishes are definitely above the standard in the industry. It’s just a great property.”

R.D. Olson has a time-lapse construction camera accessible through its website, allowing members of the public to see progress in real time.

“Our customer base loves it, our people love it and even our community loves that they can watch their community grow,” Wilhelm says. “We get a lot of feedback about how powerful that webcam is on our job sites.”

As for the community in Fullerton, Wilhelm says that the reception of the new development has been overwhelmingly positive. R.D. Olson’s focus on building relationships within the community has led to a strong reputation for the firm.

“From what I can see, I think that the community has welcomed it with open arms,” Wilhelm says. “[Opposition] is just a part of revitalization, but the city has worked with the design team very closely on the aesthetics of the building and the general appearance so that it will blend in well with the city of Fullerton.”

“If we’re going to do it, let’s do it right,” Wilhelm says. “Let’s beautify it and let’s make it feel like it is a true part of our community.”

Achieving success over the course of nearly four decades has required a level of commitment to clients and employees alike. In the coming years, Wilhelm says R.D. Olson will continue to invest in its employees, giving them opportunities to take on leadership roles within the company.

“We are looking at our next generation of leaders,” Wilhelm says. “The last few years, we have been continuing to build within the ranks. We know sustainability is not just about having backlog, but also having tenured employees.”

Having an engaged workforce gives R.D. Olson an edge over its competitors and demonstrates its commitment to people.

“I can walk into a presentation and talk about our people and the length of time and experience they have, and typically that gives me a little bit of an advantage over a competitor that I might be up against in this industry,” Wilhelm says. “Our people are the greatest assets that our company has.”